Places to visit in Nasik

Located on the edge of Godavari River at the majestic ranges of Western Ghat Mountains, Nasik is called ‘The Wine Capital of India’. Ironically, the wine capital of India is primarily known for the religious tourism. It is indeed a city of contrast. On one hand, it is home to some of the best vineyards and wine industry of the country, on the other, it one of the holiest cities of India that holds the honor of hosting Kumbh Mela once in every 12 years. The city is also associated with the Hindu Epic Ramayana. According to Ramayana, some significant events from Lord Rama’s life had happened in this region. The city has a very interesting story behind its name. It is believed to be the place where Lakshman, the younger brother of Lord Rama, cut off the nose of Surpanakha, the younger sister of mighty demon Ravan. This is how the city got its name ‘Nasik’. Let’s explore some other intriguing stories and places to visit in Nasik.

You must have read about Panchvati in Ramayana or at least heard about it somewhere. Lord Rama along with his wife and younger brother had lived in Panchvati for almost 1 year of his 14 years of exile. It is also the same place from where the disastrous demon Ravan abducted Sita ji, the wife of Lord Rama. For being so associated with Ramayana, Panchvati is today no less than a pilgrim spot for the Hindus. There are many temples and religious spots such as Sita Gufa, Ram Kund, and Kalaram Temples that entice the visitors. The other reason for its popularity is that this is the place where Kumbh Mela takes place near the Godavari River.

Located in the Trivashmi Hills, Pandavleni Caves are the ancient rock-cut caves of Buddhist that trace back the time period of 2nd century. The clearly read inscriptions, stellar carvings, riveting sculptures, and the fascinating architecture are the central attractions of the Pandavleni Caves. These 2000-year-old inscriptions are still the significant study materials for the scholars and the researchers. Earlier, the caves were inhabited by the Buddhist monks but after the decline of Buddhism in India during 7th century the caves were occupied by the Jains. Jains also contributed some structures to the caves but today, it is mainly a Buddhist holy site.  If you’re an adventurous freak, you will love Pandavleni Caves as you would need to climb or trek around 200 steps in order to reach the caves. From the high above, you can snap heavenly panorama of Nasik. 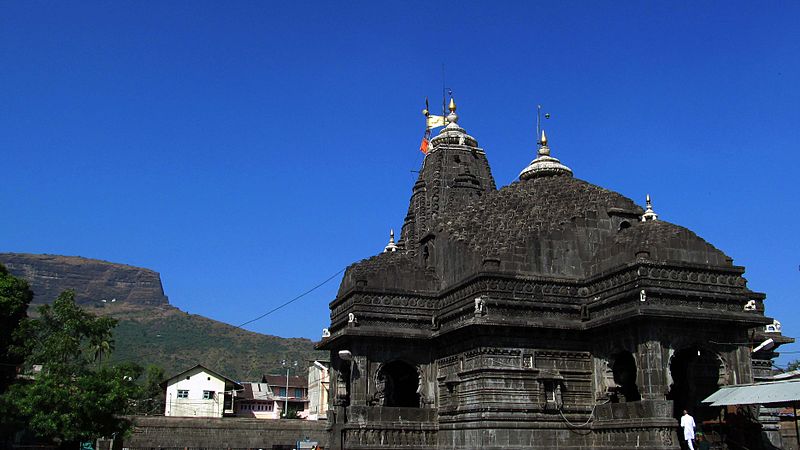 If you’re a devotee of Mahakal (Lord Shiva), Trimbakeshwar Temple should be on the top of your list. Nestled magnificently on the base of Bramagiri Hills, Trimbakeshwar Temple is one of the most spiritual, pious, and significant temples of Lord Shiva because it houses one of the twelve Jyotirlingas. Jyotirlingas are considered the most powerful manifestation of Lord Shiva and are held in supreme esteem in Hindu mythology.  So, visit the divine and one of a very rare temple and seek the blessing of Lord Shiva. As we all know, Marathas were the fervent devotees of Lord Shiva, so Peshwa Maharaja Nana Saheb constructed this temple in 18th century in the honor of almighty. Apart from its classic and typical Hindu style architecture, the soothing aura and the mesmerizing natural beauty are the other reasons that enchant the visitors. Owing to such a huge divine significance, the temple is marked by the millions of devotees annually.

With the name, you must have assumed that we’re talking about any mountain. Saptashrungi is a Sanskrit word which literally means ‘seven hills. Amid the seven majestic hills, you’ll see an incomparable shrine of Goddess Maa Durga which is exceptionally 8 feet tall and has 18 arms holding weapons in each hand. This statue can instill a sense of devotion in anybody. The temple is one of its kind so don’t forget to seek the blessing of Maa Bhawani. There are nearly 108 spiritual water reservoirs in the hills which are known as Kunds.  In Nasik, almost every temple or pilgrim spot is associated with the Ramayana and Saptashrungi too has its own share of intriguing legends associated with the epic. According to the legend, Lord Rama along with his wife and brother visited this set of hills and sought the blessing of Goddess Durga. Apart from the spirituality and tranquility, Saptashrungi offers a compelling view of entire Nasik from high above.

It is not actually a specific place but you should visit the vivid Vineyards of Nasik. After all, Nasik is the capital of wine and it houses more than 25 Vineyards. So, these vineyards certainly deserve a visit. If you don’t know where to go, you can take the ‘Wine Tour’ which is actually a sort of local service of Nasik. So, learn more about the verities of wine and of course taste them. You can also see how wines are produced and packed. Sula Vineyard is most famous among the visitors as compared to others. For the wine lovers, this wine tour is certainly going to be the best memory for the lifetime.

This one is for the adventurous lovers. If you go crazy for adventurous activities, Vihigaon Waterfall will charm you. Located amid the dense forest and cascading down from the height of 120 feet, Vihigaon Waterfall gives the opportunity to the visitors to repel in thick and mighty waves of the waterfall. Isn’t it crazy to repel amid the mesmerizing milieu of nature? If yes, then brace yourself.  Being the most alluring natural waterfall, it is the most loved destination of the local people. Vihigaon Waterfall has also rendered its bewitching allurement to the film Ashoka starring Shahrukh Khan and Kareena Kapoor Khan.

Nasik is known for religious tourism and for the temples, so you can visit the city anytime when you wish. If you’re concerned about the weather, visit between the months of September to November because Nasik remains extremely hot in summers and terrible chilly in winters. So, ideally, the best time to visit Nasik is just before the winters.

How to reach Nasik

Located contiguous to Mumbai, Nasik is easily accessible by all modes of transportations. Pune International Airport is the nearest airport to Nasik, 131 km away. Chhatrapati Shivaji International Airport is another possibility which is 172 km from Nasik. For the railways, Nasik has its own railway station and it is well connected to every corner of India. Being a major tourist hub, the city is well-developed by the road network. You can get the local public transport from anywhere at any time. Government buses make the transportation cheaper and more convenient in Nasik.

Endowed with the exotic valleys, vagrant forests, and the awestruck natural beauty, Nasik is completely intertwined with the legendary mythological sagas.  Still, the city is known for the new age sparkling lifestyle. From the different flavors of wine to the countless religious significant temples, Nasik boasts two contradictory splendor together.