Being one of the seven union territories of India, Daman & Diu grabs more attention as compared to the states of the country. However, it’s not only the tag of a union territory that makes the island so popular. The island has got its own identification and splendor. From the ancient heritage to the glorious history, from sandy beaches to resplendent churches, and from majestic forts to the magnificent temples, Daman & Diu is a unmatched fusion of Hindu and Portuguese cultural history in Gujarat. It is actually a twin-island that offers its visitors a blissful and exotic experience to treasure it forever. Sprawling in the courtyard of the Arabian Sea, Daman & Diu is bestowed with the unnumbered of tourist spots. So, let’s have a quick overview of the places to visit in Daman and Diu. 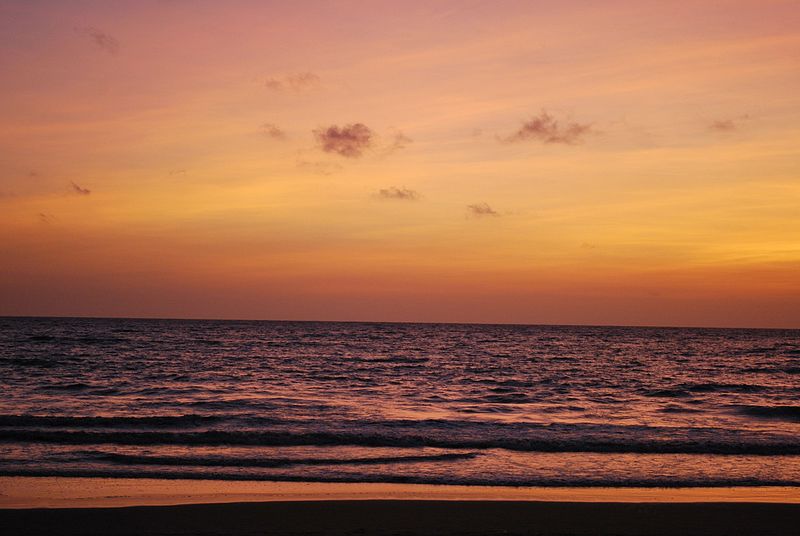 If there is a place in Daman where you can get lost in the unfathomable ocean of love, it is Devka Beach. You can feel the serenity and magnetism of Devka Beach from the far distance. And once you have set your feet on the beautiful coastline of Devka Beach, your heart will urge to fall in love again. Not with somebody, but with your own soul and of course with the indiscernible soul of nature. The beauty of this beach is that you can visit it with your family, kids, and parents. The splendor of Devka Beach doesn’t let the modernism of youths dominate. Very well known for intricate rocky sculpts, Devka Beach can give you some incredible souvenirs. And yes, don’t forget to get your camera along when you’re visiting Devka Beach.

The name sounds weird, right? Yes, because it not an Indian name. Spreading in a far-reaching area of 12250 km2, Fort Jerome is the seal mark of colonial history of Daman. It was built by a ‘Portuguese Viceroy of India’ during the 16th century. The Portuguese were in India particularly for the sea trade, so this gargantuan fort was actually built as a watchtower to keep an eye on the activities happening in the Arabian Sea. The fort is built is totally in Portuguese style. It has been 400 years but the thick ramparts of Jerome Fort can’t be breached even today. ‘The church of our lady’ and a massive statue of St. Jerome are the major attractions of Jerome Fort among others. The exceptional architecture of Jerome Fort truly deserves applause.

Gangeshwar Temple isn’t an architectural wonder, still, you should definitely visit the temple. Dedicated to Lord Shiva, Gangeshwar Temple is one of its kind. It is believed to have existed since the ages of Mahabharata and holds a strong religious significance in Hindu mythology. The interesting fact about the temple is that 5 convoluted Shivalingas are carved out of rocks and they are continuously washed by a natural stream of water. According to legend, these 5 Shivalingas were laid by the Pandavs during their exile. Owing to its significance, the temple is always thronged by the devotees. So, you too don’t forget to seek the blessing Lord Shiva. Located merely 3 km from Diu, it is easily accessible for the tourists. 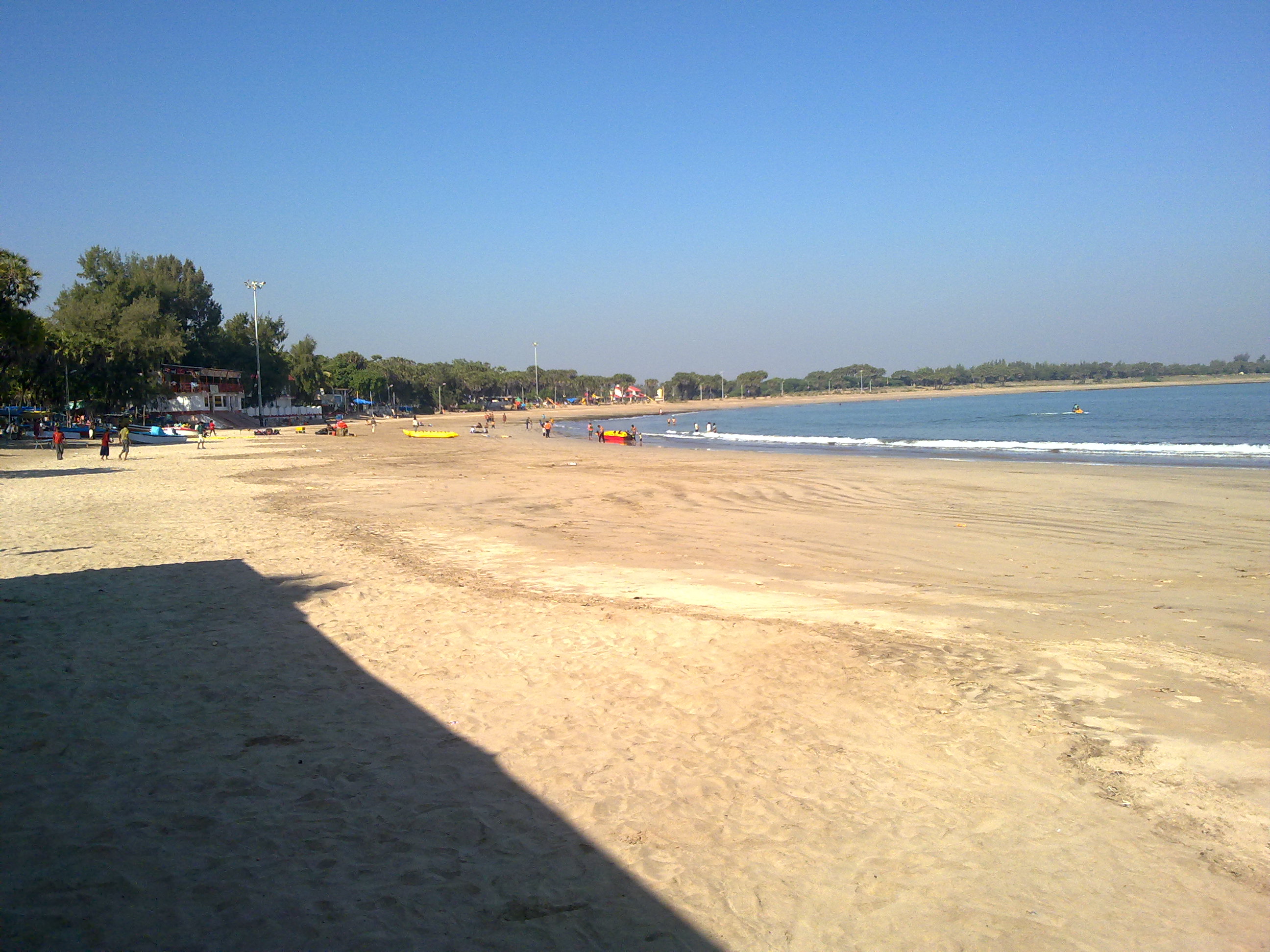 Oh My Goodness! I’m regretting wasting my time here and there. I should have come to Nagoa Beach earlier. The most beautiful and enchanting place in Diu is undoubtedly Nagoa Beach. I’m telling you, at first sight, the amusement of Nagoa Beach will make you forget that you’re on the earth. Literally, looking like the heaven, Nagoa Beach always remains composed and quiet. The lush surroundings of Nagoa Beach replete with the swathed palm trees accentuate the splendor of beach even more. You can revel in the water sports activities in Nagoa Beach but if you want to spend peacetime, just lay down in the pristine seashore of the beach and admire the nature.

Don’t forget, you’re in the colonial city of Portuguese. Be it the majestic forts or the ornate churches, all the monuments of Daman & Diu portray sheer brilliance of Portuguese architecture. Built in the late 15th century, Bom Jesus Church is probably the finest specimen of architecture mixed with art. The church is embellished in a way that it seems as it is a royal palace of a queen. The vividly ornate walls and the ceilings of the church make the tourist to laud the Portuguese art. Put your religious beliefs aside and visit this architectural wonder. The awe-inspiring interiors and the incredibly carved gateways steal the heart of visitors.

Daman & Diu is brimmed with the unnumbered of mesmerizing beaches but Jampore Beach is matchless in its own way. located at the southern edge of Daman, Jampore Beach is a perfect escape from the chaotic city life. The yellowish muddy water of the beach splashing the sea shore sweeps the visitors off their feet. The cool breezes of surrounding trees make the ambience even more alluring. Jampore Beach is particularly known for its various adventurous sports activities. From paragliding to boat riding, from parasailing to swimming, and from camel riding to the horse riding, you can go for any fun activity.

Unlike the other cities of Gujarat, Daman & Diu can be explored in summers. As it located the courtyard of Arabian Sea, the summers are not as scorching as the other cities of the state but I would say, consider summers only if you have no options left. Again, the optimal time to visit Daman & Diu is obviously winters. The mild and humid temperature makes it easier for the visitors to explore the city thoroughly. Not to forget monsoon months as they’re also a good time to visit the city. If you’re a beach lover, monsoon months will give you an unforgettable trip.

How to reach Daman & Diu

Daman & Diu is one of the most popular union territories in India, so you assume the transport connectivity. In fact, here you have two options. Daman and Diu is accessible by different- different ways.  You can opt for which one suits best for you. From one destination other (from Daman to Diu or from Diu to Daman) you can hire buses or taxis. The best way to get the city is by airways. Daman airport is 84km from Daman and Diu airport is only 10 km from Diu.

It’s hard to sum up all the tourist places of Daman & Diu in one article. I have just tried to cover up the not-to-be-missed places to visit in Daman and Diu. There is a lot more to explore. So, plan a weak’s long trip and explore it to the fullest.