Located on the snow-draped hillock of Pir Pajal mountain ranges, Jammu is the soul of Jammu & Kashmir. Often referred as the ‘winter capital of the state’ and also ‘the city of temples’, the mystic city got its name after the Hindu king Raja Jambu Lochan who founded the city in ancient time. At that time, it was just another city but over the ages, Jammu has emerged as one of the most popular tourist destinations in the country. From the gurgling waterfalls to the soothing lakes, from verdant gardens to the far-reaching valleys, from divine temples to heavenly allure of nature, and from historical monuments to the vibrant markets, the city is crammed with a number of tourist places. Let’s have a look at the places to visit in Jammu. 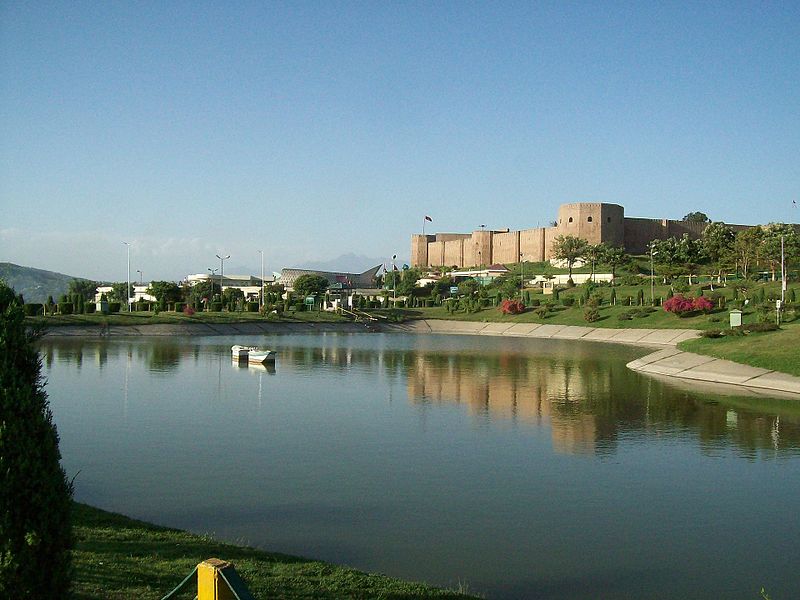 Built by Raja Bahu Lochan, brother of Jammu Lochan, Bahu Fort is the oldest monument in Jammu which traces back the time period of nearly 3000 years ago. Located on the edge of Tawi River, the fort is spread in a vast area and renders a sheer ancient Hindu architecture. The fort is accompanied by a marvelous garden named Bagh-e-Bahu garden and a temple dedicated to ‘Maa Kali’. Bahau Fort was revamped by the Dogra rulers in the 19th century, so it is still in good condition.  Built of sandstones and bricks, the fort is perched at the elevation of 325 meters. Though you have explored all the forts of India, you’ll find Bahu Fort completely different due to its structural designs and encompassing ranges.

Holding a strong religious significance, Mansar Lake is the central charm of Jammu. It is fringed by the dense wood-covered hills which make it even more alluring. Apart from its scenic vista, the lake attracts many visitors for its mythical reasons. Since the ancient time, it has been a loved tourist destination among the newlyweds. According to beliefs, a circumambulation around Mansar Lake is considered auspicious for the newlyweds. It is believed to bring good luck for them. That’s why the newly married couples from all over the world come to Mansar Lake and perform circumambulation of 4 km. The cool breeze, eye-catching ambience and the intriguing religious fact make it the most visited lake of Jammu.

A tourist place that needs no introduction! Being the most spiritual and popular pilgrim spot of Hindus, Vaishno Devi temple is the crown of Jammu. The divinity of this temple is expanded throughout the world. Not only the Indians, but people from all over the world visit the temple and seek the blessing of Goddess Vaishno Mata. According to legends, Vashino Mata is the manifestation of supreme Goddess Durga Mata. This is the main reason that the temple receives the influx of visitors in millions. Set majestically amid the Trikuta Hills, the temple is located at the altitude of 5300 feet above the sea level. The only way to reach this saintly temple is trekking. It is just 50 km from Jammu, so getting on the base of Trikuta hills won’t be difficult for you.

Being home to many spiritual temples, Jammu truly justifies it tag ‘the city of temples’. Where on hand ‘Vaishno Devi Temple’ is the crowd puller for its divinity, on other Raghunath Temple fascinates the people with its awestruck architectural styles. Built in during 18th century by Maharaja Gulab Singh and then by his son Maharaja Ranbir Singh, the temple took almost 32 years to get completed. Comprising of seven massive spires, the temple boasts the pride of being the largest complex in North India. It is dedicated to Lord Rama and the other eight incarnations of Lord Vishnu. Apart from the presiding deities, the temple also houses statues of other Hindu Gods. Pay a visit to this temple and witness the calmness of spirituality and exaltation of architecture together.

With the name, can you notice something? Hindi, English, and Urdu words together complete the name of this monument. The same goes with the architectural styles. Built in a Hindu-Muslim and European architectural style, Mubarak Mandi Palace is the most striking royal palace in Jammu. Built by the Dogra Kings, the palace served as their royal capital till 1925. Being the fusion of 3-4 architectural styles, the palace has its own glory and stateliness. It comprises of many royal palaces within its premises. Rani Charak Palace, Gol Ghar, Darbaar Hall, Sheesh Mahal, Pink Mahal, Nawa Mahal, and Hawa Mahal are the major catchments of eyes in Mubarak Mandi Palace. As natural disasters are common in J&K, the palace has gone through many onslaughts of nature. The disasters have certainly shaken the architecture but the imposing glory of this palace is still unfaltering and resonates within the four walls of the palace.

Contrary to the majority of cities of Jammu & Kashmir, the ideal time to visit Jammu is the winter season. Summers are extremely hot in Jammu. The weather can even rise up to 40-49°C, so you should avoid summers. You can visit the city in monsoon months too as it doesn’t receive heavy rainfall. Especially, if you’re going on a honeymoon, the late monsoon months would be the best time for you. Above all, the winter season is the most optimal time to explore Jammu as in winters, the weather remains pleasant throughout the day.

How to reach Jammu

Being the winter capital of the state, Jammu is easily accessible by the all modes of transportation. Unlike the other cities of the state, Jammu has its own airport and railway station. ‘Jammu airport’ and ‘Jammu railway station’ are 8 km and 6 km respectively from the central city. If we talk about the road network, the city has the best network in entire J&K. The regular buses connect the city to the nearby cities and other major cities of India. When you’re in Jammu, you won’t need to worry about the local transportations. You can get the one from anywhere at any time. So, getting Jammu is convenient by the all modes of transportation.

Being a blend of many cultures, Jammu is a treasure trove of consummate places. The more you’ll explore the city, the more you’ll fall in love with it.  Visit it once. It will call you back again and again. So, what you’re waiting for??