The heaven of peace: Kochi

Located on the south-west coast of India, Kochi served as the most significant trading hub of the country in the ancient history. Once inhabited by the Arabs, Dutch, Portuguese, Chinese, British, and Jewish traders, the city has a prideful history when it comes to trade & commerce. Owing to its rich trading background, today, it is called the financial capital of Kerala. Not only this, the city also boasts the tag of being one of the most happening and distinctive tourist destinations in Kerala. Known as the ‘Queen of the Arabian Sea’ and ‘Gateway to Kerala’, Kochi is deeply woven in history and culture and unfolds a completely intriguing splendor to its visitors. So, let’s land in the gateway to God’s Own Country and explore places to visit in Kochi.

The glamour of Kochi starts from Kochi Fort. Manifesting the exceptional architectural, the fort also reveals the story of gratitude expression and thanksgiving of Indians. In ancient time, the fort was owned by the Maharajas of Kochi but they gave it to Portuguese, who had supported Kochi Maharajas in their rough times, as a sign of gratitude. After Portuguese, it was ruled by Dutch for a long time, thus today, Kochi Fort is a fusion of Indian, Dutch, and Portuguese remnants. Moreover, this is the region where Vasco Da Gama is believed have had lived. Kochi Beach alongside the fort is another interest of visitors in Kochi Fort. 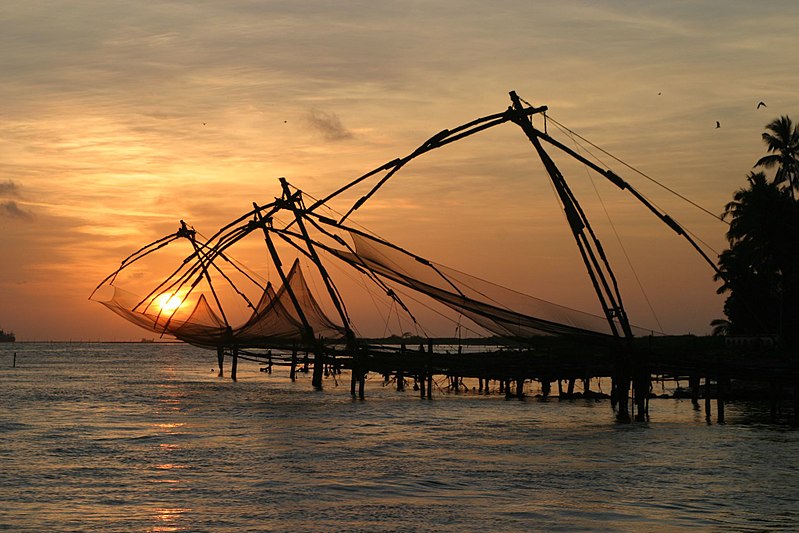 Yes, Fishing Nets are the visitor’s charm in Kochi. Standing as the testimony to the smooth relation of Kochi and China, Chinese Finishing Nets are known for its incredibly unique and exceptional structural designs. According to legend, these fishing nets were gifted by a Chinese King to a Kochi Maharaja. These nets are believed to be found only in Kochi, obviously outside of China. Today, Chinese Fishing Nets are the famous tourist destination in Kochi because they offer an awe-inspiring view of the sunset. Amidst the water, these 10-meter high net seem to be a steadfast splendor of China’s technology and machinery.

Named after Lord Willingdon, Willingdon Island is the finest exemplar of the modern-age development of science and human minds. Being one of the largest man-made islands in the country, Willingdon Island houses many luxurious hotels and some commercial centers of the district. Constructed during the Second World War, Willingdon Island offers the utmost serenity to the visitors. If you had a tiring day, head to Willingdon Island. Here the commanding beauty mixed with the miraculous tranquility touches the heart of visitors.

No, we’re not talking about Marine Drive, Mumbai. Neither this is a driveway where you can go for a romantic long drive. Here in Kochi, Marine Drive is actually a picturesque and romantic promenade of nearly 3 km along the coastline of Kerala Backwaters. If you really want to enjoy your Marine Drive walkway, walk with your loved ones hand in hand.  Life really seems awesome in such places. Marine Drive is actually the most loved place of local people for the morning and evening walks. There are many small stalls and shopping malls too on the way. Dotted with the amazing background of backwaters, Marine Drive is yet another romantic place in Kochi.

The erstwhile royal palace of Maharajas of Kochi, Hill Palace is today one of the largest archeological museums in the state. Encompassing in a sweeping area of 55 acres and consisting of 49 buildings, Hill Palace Museum demonstrates the royal stateliness of Kochi Maharajas. Built in 1865 and converted into a museum after the Indian independence, the palace is in good condition and is well-maintained. From royal crowns to ornaments & costumes, marble-made sculptures, sharp weapons, intriguing painting & inscriptions, and coins, the Hill Palace Museum showcases the bygone era of Kochi Maharajas. The museum consists of also a children’s park which is a major amusement. Except for the Monday, the museum remains open for public visit on all days.

When in medieval India, some of the Indian Kings were not able to build a friendly relationship with their own domestic kings, the Maharajas of Kochi shared a smooth relationship with the foreigners. I must say, there was something extraordinary in Maharajas of Kochi or they used to understand the value of a relation more beautifully. And Matancherry Palace is yet another testimony to this boundless and wonderful relationship. The palace was built by the Portuguese and was gifted to a Kochi Maharaja in 1555. The double-storied palace is known for unsurpassed architectural style and of course for the breathtaking background of backwaters. Though it was built by the Portuguese, it is a typical Kerala style edifice and also comprises of a temple in the courtyard. Today, the palace stores many leftovers of the royal family of the palace.

When you’re in Kochi, don’t miss a chance to explore the largest shopping mall in India. Yes, owned and run by EMKE group, Lulu Shopping mall is famous for its luxuriousness. This 20- storied mall has 300 extravagant rooms and maybe countless stores, food outlets, and restaurants. So, even if you’re running on a tight budget or not in a mood of shopping, visit the Lulu Shopping Mall to witness the new-age vibrancy of Kochi. From a little needle to an International product, here you’ll get everything.

Kerala is known for the natural beauty, so how Kochi can be devoid of it. Amid the inexpressibly milieu of nature, Athirapally Waterfall is a 24-meter high fall and is located on the river of Chalakudy. This turbulent waterfall is indeed a visual treat for the eyes. So, spend some quality time here on the bank of Chalakudy River and admire the splendor of nature at its best. If you’re lucky enough, you may also get a sight of wild animals such as lion, leopard, and tigers because this region is replete with the rich flora & fauna.

Kochi can be visited all year long. In every season, it has something different to offer its visitors. In fact, I would say you should consider visiting Kochi in all three seasons in your entire lifetime because the allure of Kochi changes like the weather too. And like weathers, Kochi in every season has its own beauty.  The best thing about Kochi is that it experiences a moderate flow of every season. There are no freezing nights, heating noon, and rainy days after days. So, just plan and pack your bags. Winter is ideally good for the family vacation and rainy months are loved by the honeymooners. Summers are good for those who don’t want chaotic crowd everywhere because, during these months, the tourist places of Kochi remain a bit less crowded as compared to other seasons.

How to reach Kochi

As I said before, Kochi has been a major trading hub of India, so the city has too developed transportation service. You can reach Kochi by four ways- airways, railways, roadways, and waterways. Obviously, you won’t go by waterways, so leave this one. Talking about airways, Kochi International Airport is the nearest airport, just 29 km from the main city. And by train, Kochi is also easily accessible. The city has two railway stations named Ernakulam Town Station and Ernakulam Junction Station which connect the city throughout the country. If you’re not a far off visitor, go Kochi by your own vehicle or by the hired buses & cars because capturing the never-explored beauty of Kochi through your window mirror would be the best thing to experience in your trip to Kochi.

From being a trading hub to a loved tourist destination, Kochi has come a long way. Today, it is a city where tourism, trade, history, culture, spirituality, and modern age vibrancy stand side by side. So, the city certainly deserves a visit.  The numbers of places to visit in Kochi are endless.