These 6 places will make you fall in love with Bihar

Bihar- this word has its own meaning in India. Say once that you’re from Bihar and the person in front of you won’t take even a moment to perceive you as an unsophisticated person. Steeped deep in history, the state was once the ruling seat of Hinduism, Buddhism, and Jainism but today it is one of the most underrated states in India. Don’t know why but Bihar is often overlooked and neglected by us, the Indians. Be it their culture, education, history, or the tourist spots, the state often goes unnoticed. So today, we have come up with a list of beautiful places to visit in Bihar that will bring you a bit closer to this charismatic state.

As Bihar accounts a rich history of Buddhism and Jainism, you’ll find here many monuments associated with these two cultures.  Bodh Gaya, which is considered to be the most sacred pilgrim spot of Buddhists, is also one of them. Bodh Gaya is the place where Buddha attained the enlightenment and it is considered to be the land of Nirvana in Buddhism. Being a UNESCO World Heritage Site, Bodh Gaya is the crowd puller of tourism in Bihar. There you’ll see many remnants that still manifest the spirituality of Buddhism but among all these, Bodhi Tree, a large stone-made statue of Lord Buddha, and Mahabodhi Temple are the significant ones. Bodhi Tree is believed to be the tree under which Buddha attained the enlightenment. 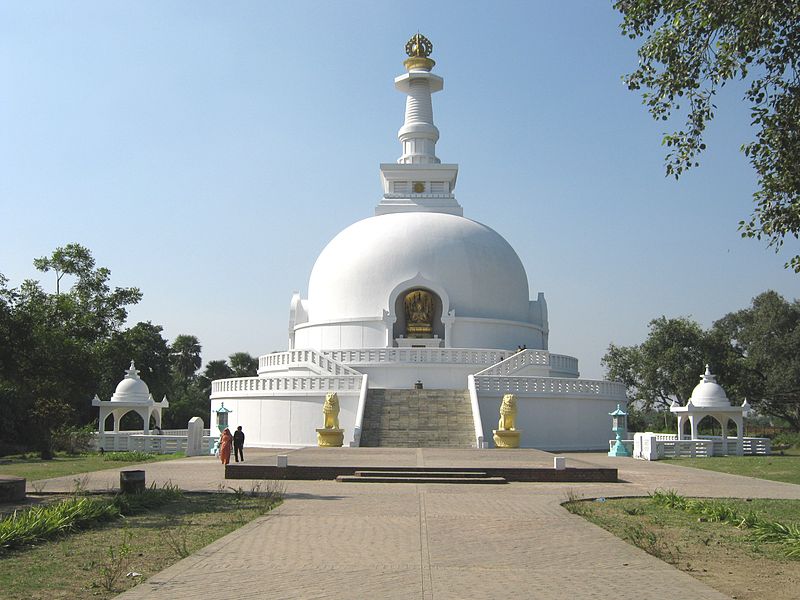 No, we’re not talking about Varanasi. Vaishali is a district in Bihar which is associated with Buddhism and Jainism. Vaishali is believed to be the place where Lord Buddha delivered his last sermon during the 4th century BCE. Here, the major catchment of the eye is ‘The Ashoka Pillar’ which he constructed to commemorate this auspicious occasion of Buddhism. This lion pillar has borne the ravages of time and still stands high narrating the glory of emperor Ashoka. Talking about Jainism, Vaishali is said to be the birthplace of Lord Mahavira. Don’t forget to visit this village as it is a melting pot of many beliefs.

Whether you have heard anything about Nalanda or not but you must have heard about Nalanda University, one of the oldest universities in the world. Though today in front of the world-class hi-tech universities, it has lost into the dust but once it used to be tagged as the ‘seat of knowledge’. In ancient time, Nalanda was so popular for the education that it even caught the eyes of Chinese traveler Hieun Tsang. Today, you’ll see there Hieun Tsang Memorial Hall. This is again a pilgrim spot of Buddhists and Jains, so magnificent Stupas and monasteries are the central attractions of the city.

When you visit Nalanda, also visit Rajgir which is only 15km from Nalanda. Entwined with the glorious history, immortal spirituality, and the awe-inspiring natural splendor, Rajgir is a different façade of Bihar. Usually, in Bihar, you’ll hardly see the hills, springs, forests, and vegetation but Rajgir is replete with all these enchanting splendors.  Like other tourist spots of the state, it is also known for the Buddhist and Jain religious significance. Being the specimen of peace & non-violence and manifesting the finest Japanese craftsmanship, Vishwa Shanti Stupa is a must visit place in Rajgir. Also, don’t forget to visit Veerayatan Museum which is a Jain museum.

Earlier known as Patliputra, Patna was once the cradle of kingdoms. From Hinduism to Buddhism and to the Jainism, the royal kingdom of Patliputra has given them roots to flourish. Not only this, Patna is believed to be one of the oldest continuously inhabited cities in the world. Today being the state capital, it is the most sophisticated city in Bihar.  Here, don’t ask for the special attractions because the entire city deserves a visit but if you don’t have much time, visit at least Golghar, Gandhi Nagar, Patna Museum, and Patna Planetarium.  If you’re a lover of Handloom and Handicraft, Bhagalpur Market of Patna will steal your heart.

If you have read Indian history even a bit, you must be aware of the fact that Pawapuri is the place where Lord Mahavira was cremated. Today at that spot, a marvelous temple named ‘Jal Mandir’ has been constructed which is the crowning jewel of tourism in Bihar. Built of white radiant marbles amid the water, Jal Mandir is one of its kind. A 600ft long stone bridge connects the temple to the mainland. Apart from Jal Mandir, Gaon Mandir and Gunagayaji Temple are also the must-visit places in Pawapuri.

The tourism of Bihar is restricted to the temples, monasteries, and the pilgrim spots only, so you can visit anytime when you want. If you consider the weather a major factor for your trip, avoid summers because summers are scorching in Bihar. Bihar receives a great deal of constant rainfall, so monsoon months are also not optimal time to visit Bihar. To avoid all these inconveniences, visit Bihar in winters. It is the most appropriate and fulfilling time to explore the state.

How to reach Bihar

Though Bihar is not a popular tourist hub in India, it is very well-linked to the other parts of the country. Jayprakash Narayan Airport and Bodhgaya Airport are the most appropriate stopovers to reach Bihar. Foreign tourists have to land at any International Airport of the country and from there, they can easily get a flight to Bihar. If you’re going by rail, again Patna and Bodhgaya railheads are the most approachable ones. Talking about the road network, Bihar has an excellent connectivity in- and outside of the state.

Bihar is mainly a pilgrim spot for Buddhist and Jains but the state has something unique to offer everyone irrespective of the beliefs. Here, you might not get the exalting splendor of Rajasthan, the romantic experience of Jammu & Kashmir, the glorious history of Maharashtra, or the sparkling vivacity of Goa but a visit to Bihar will give you the memories that you can’t get anywhere else in India.